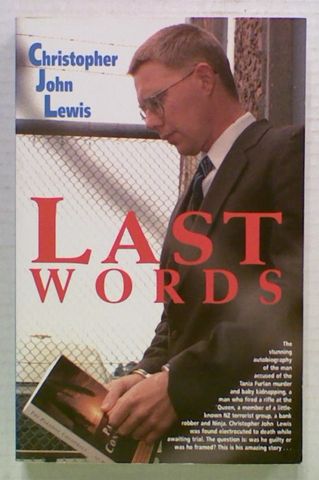 Last Words. The stunning autobiography of the man accused of the Tania Furlan murder and baby kidnapping, a man who fired a rifle at the Queen, a member of a little known NZ terrorist group, a bank robber and Ninja. Christopher John Lewis was found electrocuted to death while awaiting trial. The question is: was he guilty or was he framed? This is his amazing story. Awaiting trial on murder and kidnapping charges, one of New Zealand's most notorious criminals made a phone call to New Zealand's hardest-hitting publishing company. Christopher John Lewis and his lawyers told Howling At The Moon Productions he had a story to tell, a story we woudn't believe, but a story that was true.'