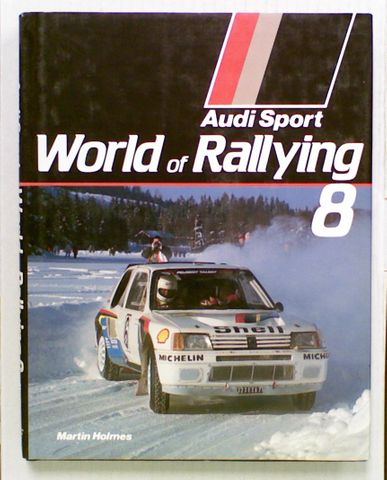 Audi Sport World of Rallying 8 by Martin Holmes. ' Publisher's Note: Audi Sport World of Rallying 8 tells you about the 1985 season of international rallying, a year in which remarkable technical changes have been introduced into rally car design. The Author Martin Holmes is probably the world's best-known rally journalist and authority. 1985 marked his eleventh anniversary of work as an international rally reporter. In addition to his responsibility as rally contributor foe Motor magazine in England, his stories and pictures are syndicated worldwide and now appear regularly in over twenty-five different countries in six continents. Once again he is the only British journalist to attend all the qualifying rounds of the world championship, which has given him a unique opportunity to present a balanced view of the season. A LARGE BOOK THAT WILL REQUIRE ADDITIONAL FREIGHT.