By a Person or Persons Unknown 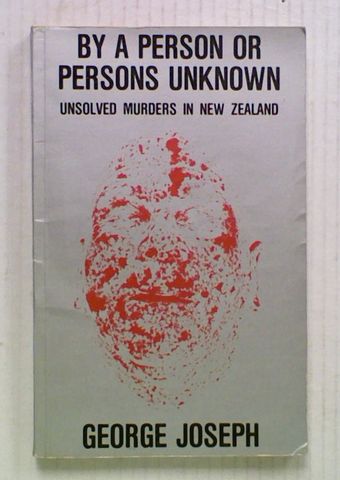 By a Person or Persons Unknown. Unsolved Murders in New Zealand by George Joseph. 'In 1942 two elderly sisters, Rosamond and Annie Smyth, were found dead, battered to death with an axe. Six years later, less than three miles away, retired railway worker Herbert Brunton was killed in exactly the same way. Who killed them, and why? Who sent the lethal parcel bomb that killed solicitor James Ward? Who phoned the police almost two years after the murder of Tracey Ann Patient, and told them where to find her missing signet ring? Who gave hitch-hiker Jennifer Mary Beard her last ride? George Joseph has examined the police files and other evidence relating to these and several other intriguing unsolved murders in New Zealand. The result of his research is a series of fascinating case studies, describing in a grippingly readable style the murders, the victims, the suspects and the detective work done by the police.' The book has light to medium general wear with creasing to the covers and the spine has been re-glued but overall a tidy copy with faults.