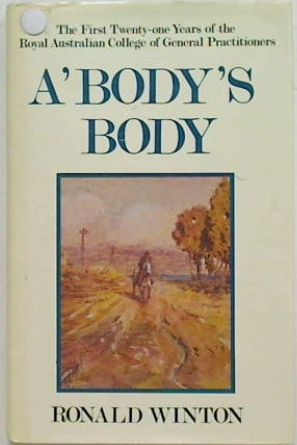 A' Body's Body: The First Twenty-one Years of the Royal Australian College of General Practitioners by Ronald Winton. 'For the first century of the colony's life, from its bleak beginnings in 1788, all medical practice in Australia was essentially general practice. Only after that did the specialism and hierarchical structure already established in Britain begin to take over. Meanwhile, Australian general practitioners had acquired a standard of practice and a standing in the community higher than was usual in the Old World. With a hardening of the demarcation between the specialist and the general practitioner, a challenge came to those who wished to see the high standard of general practice in this country maintained and improved. So general practitioners took the initiative in relation to their own destiny. Following the lead of their College with positive and constructive objectives.' The dust jacket has light to medium general wear with a small closed tear on the back and some tape ghosting. The book however remains in a tight and bright condition.