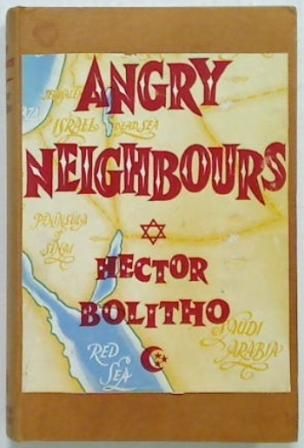 Angry Neighbours. A Diary of Palestine and Transjordon by Hector Bolitho. Hector Bolitho went to Palestine in 1932 while writing his biography of Alfred Mond, First Lord Melchett. The following year he went to live with King Abdullah in Transjordon, hoping to write a biography of King Hussein. Over these two years he kept a diary which is the basis of this book. In neither of these adventures was he a casual traveller. He went to Palestine when the dream of Zionism was still young and unarmed, he stayed on Zionist settlements and met the leading Jews of the time. The belligerence that sours these lands to-day makes this diary of over a half century ago, important, but infinitely sad. The dust jacket has been cut down and pasted onto the front cover and the jacket fly page has been taped into the inside front page. The book has light foxing but overall still tidy.