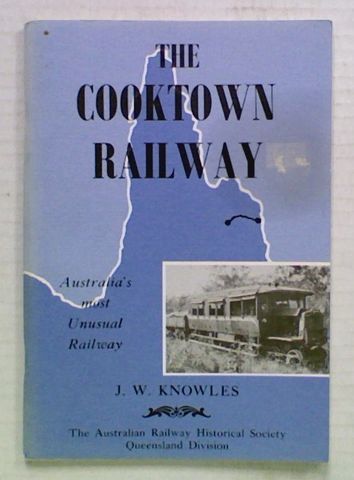 The Cooktown Railway by J. W. Knowles. Few railways have had a history as unusual as that of the Cooktown Railway in North Queensland. This 67 miles line operated from 1885 until 1961 as a separate railway not connected to the main Queensland system. It had its origins in the riches of the Palmer Goldfield, but never shared in the wealth of the field. It ran to no centre of population and was hopelessly unprofitable; it did not reach its intended goal, but terminated at a large bridge which was used only once; it was closed for several months early last century and then operated by the Town Council before being taken over again by the Government; it had the first regular and reliable rail motor service in Queensland, and for the last 34 or so years of its existence, it was operated entirely by tiny rail motors making a weekly trip; and for many years, it was under the control of an Officer-in-Charge who was a true Pooh-Bah. The book has light general wear with a small remove sticker stain on the front cover but overall a very tidy copy.