The Fifth Schedule: The Story of Waimate's 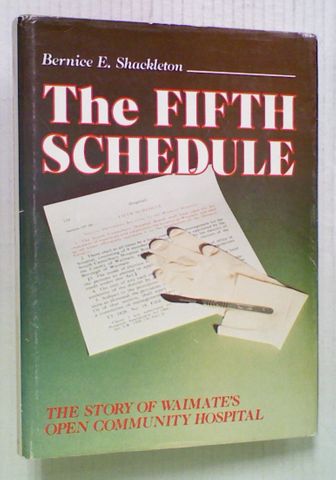 The Fifth Schedule: The Story of Waimate's Open Community Hospital by Bernice E. Shackleton. 'Is the small district hospital vital to the modern New Zealand heath system? This question is posed by the remarkable story of Waimate, a South Canterbury community, in its fight to develop and retain the services of its hospital. In 1885 the Hospital and Charitable Institutions Act put the Waimate Hospital under the control of the South Canterbury Hospital Board. A succession of colourful leaders and a vociferous public chafed at this loss of autonomy. Two early magisterial commissions did not pacify them and in 1905 Waimate petitioned for a separate hospital district. It was unsuccessful; but in 1909 the hospital won the special protection of the Fifth Schedule of the Hospital and Charitable Act. Further crises demanded judicial interpretation of the Schedule. In 1932, believing that the hard-won Schedule was about to be dropped from the Act, Waimate carried the debate to the floor of Parliament. Meanwhile the hospital prospered. With highly skilled surgeons an an innovative committee of management it opened its wards to all the medical practitioners of the town, introduced for a time a rotating superintendency, built up its nursing school to A grade status and became a highly efficient eighty-bed hospital.' The dust jacket has light general wear with sun fade and light scuffing along the edges. The book remains in a tight and bright condition.