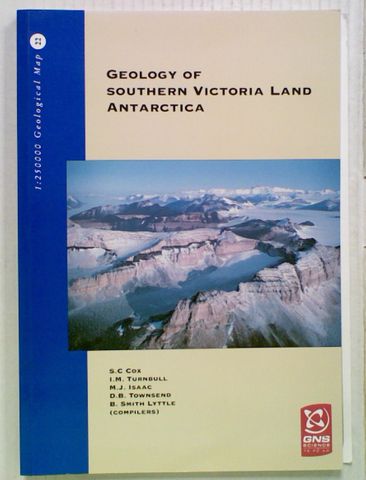 Geology of Southern Victoria Land Antarctica. Compiled by S. C. Cox, I. M. Turnbull, M. J. Isaac, D. B. Townsend and B. Smith Lyttle. SADLY the MAP is Missing. 'The accompanying text summarises the geology, landforms, and paleoclimate history of the area, as well as previous geological explorations. The region is crossed by a major rift basin, the uplifted shoulder of which forms the Transantarctic Mountains escaroment. Large stratovolcanoes associated with the rift are present on Ross Island an on the mainland nearby. In the Transantaritic Mountains, Neoproterozoic and Paleozoic graitoids and their metasedimentary host rocks are overlain by a thick sequence of sedimentary rocks of the Beacon Suopergroup, intruded by Ferrar Group dolerite sills. These rocks are exposed in spectacular outcrops of the ice-free Dry Valleys, the mountain range crest, and the nunataks that project through the ice of the Polar Plateau. The Eocene to Holocene deposits in the Dry Valleys,and beneath the Ross Sea preserve a record of sheet ice and glacier fluctuations, from which the history of climate change can be inferred.'