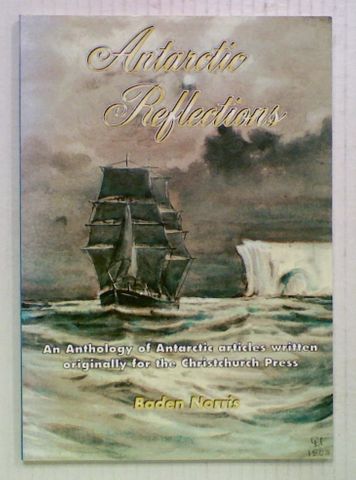 Antarctic Reflections: An Anthology of Antarctic Articles written originally for the Christchurch Press by Baden Norris. 'Baden Norris, Antarctic Curator at Canterbury Museum, is a leading Antarctic and maritime historian who has had a long association with Antarctica and shipping. He has been associated with Canterbury Museum since 1956, and took part in an archaeological expedition to the Cook Island in 1963. He was part of the initial groups who dug out Scott and Shackleton's historic huts on Ross Island during 1963 and 1964, retrieving many valuable historic artifacts. Since then he has made numerous visits to both Antarctica and the Subantarctic Islands while serving as a guide on a variety of tour ships from the earliest days of Antarctic tourism on the Lindblad Explorer.'